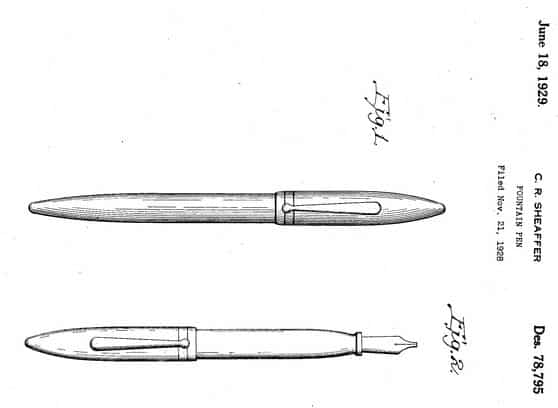 The Sheaffer Balance is a fountain pen that was first produced in the 1928 but is commonly associated with the 1930s. It’s of the Parker Duofold vintage, but with a streamlined design that was quite extraordinary at the time. The Balance set a new standard for fountain pens at the time and is said to have kicked off a streamlined design craze with tapered ends and more of a torpedo shape the a cylindrical one.

The name of the pen comes from the balanced design when the cap is posted. The pivot point for the pen is just about in the middle, which makes it a comfortable writer, especially when this uniform weight distribution is combined with the pen’s very light weight.

Prior to the Balance most pens were made of hard rubber and had cylindrical designs. In 1924 Sheaffer pioneered the use of celluloid in pens, which brought a great material and much innovation (the colors normally associated with celluloid came a few years later). After a few years of plain, cylindrical designs Sheaffer introduced the “Streamlined Fountain Pen” and protected the design with U.S. Patent Number D78,795. This new pen had tapered ends and was very comfortable to write with. Aesthetically, it was modern looking and unlike anything else on the market — just look at the Watermans and Parkers from the late 1920s!

The nib was a 14K gold nib that offers some line variation, but is not a flexible nib.

The Balance is a lever-filling pen, which was the most common mechanism at the time. Some later models were sold with a vacuum filling (known as a plunger filler) mechanism, but almost all the Balance pens still around are lever fillers. The mechanism is simple, durable, and tends to work quite well. Restoring and repairing a lever filling Balance is a simple task where

The Balance is a solid collectors pen if you are in the market for a vintage pen. The pens were very common at the time so you can often find these pens in used marketplaces for well under $50. Rare models, like the ebonite pearl, and new old stock (NOS) can sell for considerably more, but this pen is easy to find at under $50 in top condition or used and in need of a cleaning for under $25.

The Balance is designed to be used posted, but the caps — especially as they get older — are prone to cracking when pushed down on the pen body. For this reason many collectors will not post their Balance caps. There is a cap band, but this is placed high enough up the cap that small cracks below the band are possible.