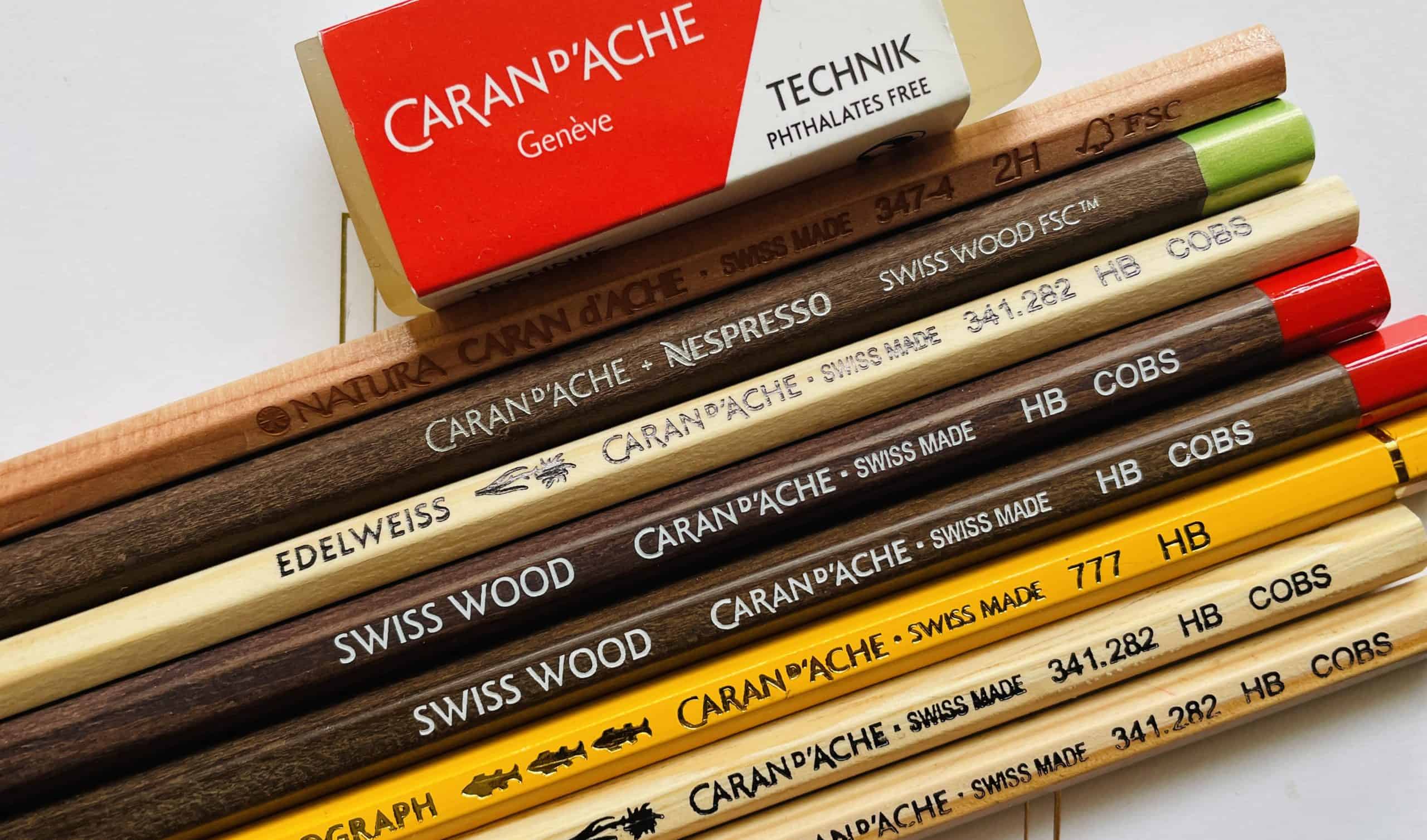 Caran d’Ache makes, and has made, a wide array of high quality wood pencils. The line spans from everyday, student pencils, to luxury pencils made of unique types of sustainably sourced wood.

It’s not that easy to differentiate from one pencil to the next, despite the obvious care Caran d’Ache has put into these pencil. This article will try to clear things up a little and make sense out of this wonderful line of pencils.

All Caran d’Ache’s pencils are hexagonal in shape unless otherwise noted. They are all sold pre-sharpened as well.

The most notable pencil in CdA’s pencil lineup is their Swiss Wood pencil. This is a luxury pencil, with a price tag over above $5 per pencil, that is made of a heavy Grovelier beech wood from the Jura mountains. It’s immediately recognizable as a quality piece of woodcraft, with a weight that sets it part from a standard cedar or pine pencil.

This pencil has no ferrule or eraser, comes pre-sharpened and uses sustainable sourced “COBS” wood. It isn’t painted, but rather it is varnished with a matte finish, with a painted tip (which we refer to as “dipped” above). It is sold pre-sharpened and the red dip is topped with a Swiss cross.

The pencil is beautifully constructed and it’s a good writer, but the lead’s color is quite light for an HB, which is disappointing if you want a darker, more legible pencil. On the upside the point tends to last for quite a long time and requires sharpenings are infrequent.

The most common Swiss Wood pencil is the one made of beech wood. It’s dark in color with a matte varnish that shows off the wood, and has a painted red tip. There is no eraser, instead there is a small Swiss cross (white on red) at the end of the pencil.

Beech isn’t the only type of wood used in the Swiss Wood pencil. The other wood type used is Scots Pine, which is both lighter in color and over a gram lighter in weight.

The pencil is made in collaboration with Nespresso, so it’s said to be a limited edition, but it’s actually very easy to find and one of the most affordable ways to get access to to Swiss Wood pencils (if you don’t have a Swiss stationery store near your home). This pencil looks like it isn’t different from the standard Swiss Wood, but it has some important changes:

The two premier pencils in the CdA line-up are the Swiss Wood and the Nespresso pencil. These are essentially the same, side from the details above. The more important thing is that they actually write somewhat differently than one another.

The Nespresso model, thanks to the addition of coffee grinds to the graphite mixture, is a bit darker than the standard model, which is appreciated as the Swiss Wood is a bit too light for an HB. The tradeoff for this is that the lead on the Nespresso model is a little bit crumbly, which means it’s much more prone to smearing on the paper (particularly for left-handed writers).

The bigger issue is the Nespresso graphite is a good deal weaker than a standard pencil lead, and the end of the tip will almost always break after sharpening. The break will usually be small, maybe just a millimeter or two, but it’ll leave an ugly mark on the page and it’ll interrupt your writing. More than anything, it’s just frustrating, as the Nespresso pencils aren’t cheap.

The graphite of the normal Swiss Wood erases somewhat better than the Nespresso model. The espresso ground-laden graphite will stain the paper a little and while it erasers better than expected, the page will be left a little grayer relative to what you’d see from other Caran d’Ache leads.

The Edelweiss is large line of pencils that is sold in 2H, F, HB, and 3B hardnesses. It is CdA’s line of student pencils, but that doesn’t necessarily mean they are made as cheaply or carelessly as possible.

These as are hexagonal pencils, usually with no eraser. They are all made of Scots pine, with one model, the 341.282, being made from Swiss wood and thus carrying the COBS label.

The 341.282 is has a light water-based varnish on it and it has a raw top with no paint, ferrule, or eraser, but it is shaped to a very slight dome. We tested it in a HB hardness.

Another Edelweiss pencil is the 341-3 (tested in F hardness) which is painted and has the FSC label but not COBS.

The Grafood offers a completely line of pencils, from 4H hardness up to a very dark 9B, with 15 different grade in total. We tested this model in number 775, HB hardness, in a grey painted finish. It has a domed top, with some sort of plastic or other hard material on the top, under the paint.

Each of the 15 different hardnesses has a different shade of grey so you can differentiate them from one another. These can be used as normal writing pencils, but they are designed for artists and they are designed to show off the nuance offered by graphite as well as Caran d’Ache’s mastery of the material.

The Natura is a natural pencil made of cedar. It has water-based varnish, like CdA’s other natural wood pencils but it has a more natural finish than the others. The Natura is sold in 2H (tested), F, HB, and 3B hardness levels.

This is a general use graphite pencil that is sold in 12 hardness levels, from 6H up to 4B. It has a classic yellow color that Americans will associate with student pencils and the Dixon Ticonderoga.

This is the most “vanilla” pencil in the CdA line. It has a standard ferrule and eraser, comes in a very normal yellow color, and has neither FSC or COBS markings on it. It’s even missing a hardness indicator, but from the catalog we know it to be an HB pencil.

Other Graphite Pencils From Caran d’Ache

Of course, CdA make a large array of pencils and this is just a sampling of the ones we’ve tested. The company is known for its ranges of (non-graphite) colored pencils, like the Swisscolor, Aquarelle, Supracolor, and Pablo, as well extensive lines of pastel and charcoal pencils.

As far a graphite pencils go, other models include:

Here is the breakdown from the 2021 catalog if you are curious about model numbers or which hardness grades are available with each model:

These woods are colored in order to bring to the grain of the wood, but they don’t have the focus on the natural tones and textures you’d find in a Swiss Wood or Natura pencil.

In another edition CdA sold scented pencils. These were made in collaboration with the perfumer Mizensir, which is based in Geneva.

A Note On Labels: In some materials online, Caran d’Ache says it only uses FSC and COBS-approved wood in its pencils, other in its latest catalog it is noted that only some pencils are FSC. Not all CdA’s wood pencils have a FSC or COBS label on them, so this article we’ll identify the label on the pencil only. It’s worth noting that none of the pencils say both FSC and COBS and a few say neither, so it’s hard to speak definitively here.