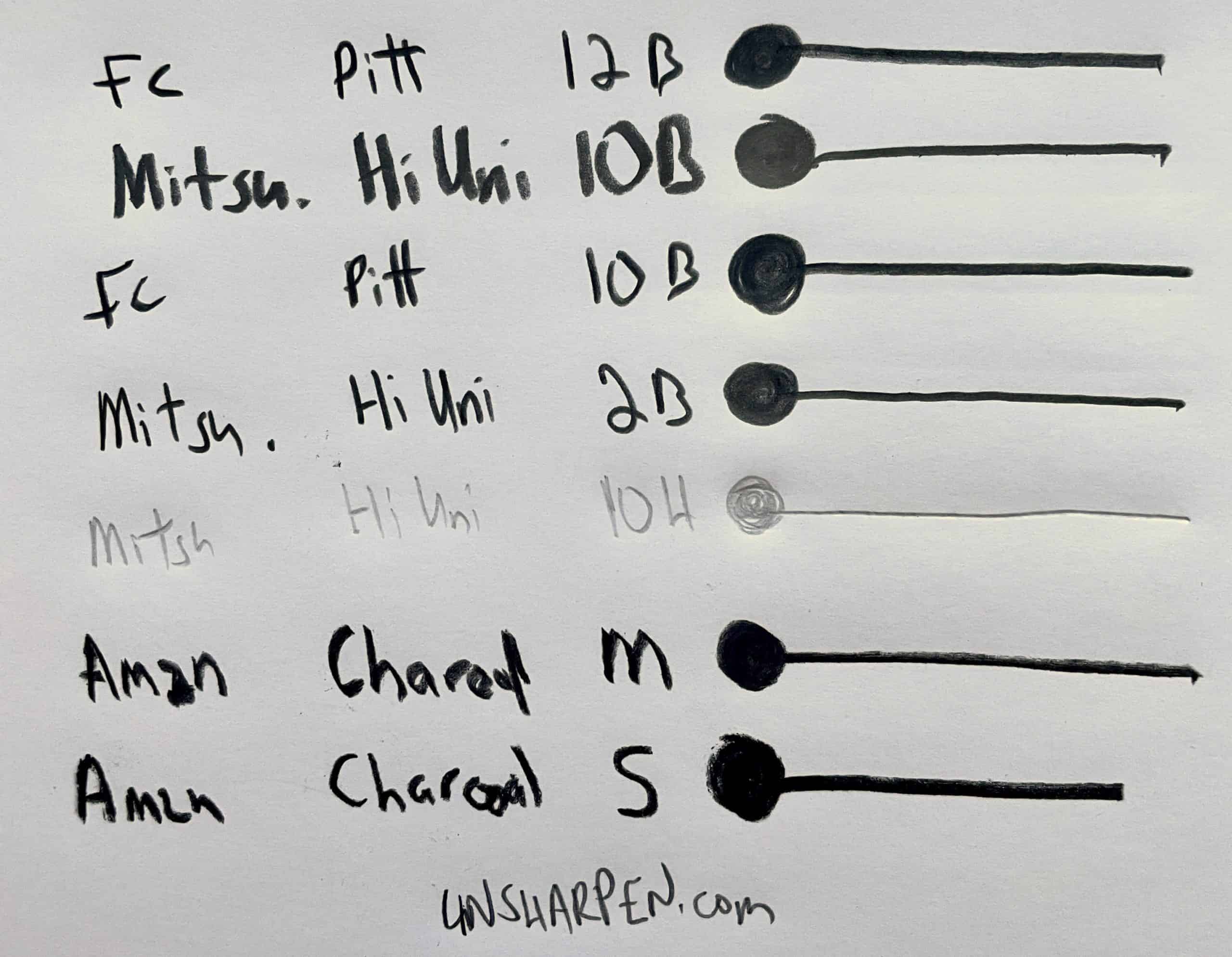 One of the common questions we see on Unsharpen is, which pencil is the darkest? In other words, which pencil has a graphite (or even a charcoal) which puts down a line that is the blackest black possible.

We did some investigation to see which pencils were worth considering if darkness is your goal.

In our pencil grade explainer article, we dove deeply into how to determine the relative darkness of a pencil based on its grading — that little mark on the side like, “HB” or “#2”. While you can learn about this topic for some time, researching deeply into the history of pencil hardness scales and so forth, the end result isn’t too complex. We’d summarize it as the following:

The thing is that the scales are relative within the pencil line, which is to say that they don’t adhere to an international standard. Instead, each pencil manufacturer adheres to its own scale, deciding what graphite mixture is an HB and which is a 2B. So some companies will have a 2B pencil lead that is darker and more crumbly in texture than that of a competing brand.

Pencils are most commonly sold with graphite cores, but some are actually charcoal. Charcoal is softer, darker, and more fragile than a typical pencil, often having a more chalk-like texture. Charcoal isn’t always darker then graphite but it can get much darker, with a color that can get as near to a pure black as you’ll be able to find in a wooden pencil.

Charcoal pencils don’t always #2 or the HB scale, instead they’re sold as being “soft” or “medium” in hardness which will often correspond to a lighter or darker color.

Wooden case pencils can house either graphite or charcoal cores, making them either charcoal or graphite pencils. They may look similar but you can usually tell them apart in a glance because they are designed for different activities.

Charcoal is often sold in sticks as well. They are a bit messy to use and sharpen, but they are more affordable than charcoal pencils. Since these don’t have a wooden case and thus aren’t pencils, we’ll leave them out of our considerations.

Charcoal pencils have a crunchy feel to them and write with a lot of friction. They are good for art, but have a nails-on-a-chalkboard texture that makes them difficult to enjoy when writing on paper. They are also prone to smudging and their charcoal cores are easy to crack. On the whole, charcoal pencils are great for art, but are not good for general use.

One example is the General’s Charcoal Pencil. It has a charcoal core, made of burnt willow tree, and a cedar wood case. It’s sold in different degrees of black, with the most common being 6B, 4B, and 2B.

An important thing to watch out for is that many colored pencils lines sell a color called “charcoal grey” or the like. This is usually a dark grey, nearly black, colored pencil, but it won’t be made of charcoal! An example of a colored pencil that looks like and even writes like a graphite pencil is the Koh-i-Noor Gioconda Pastel, which is quite dark but isn’t a true pencil as per our definition.

So, with all this in mind, what are the darkest pencils? Well, we know from the above that we are looking for a pencil with the highest number with the “B” scale, or the lowest number in the number scale, or something made of charcoal.

After testing (some of which you can see in this article’s images) and much research, here is a list of very dark pencils to consider…

All of these pencils, except for the charcoal one, are super smooth, prone to smudging, and have very dark graphite. As you can see in the sample images, the charcoal — even in an HB variety — is quite dark, nearly black. The charcoal also has a matte coloring which makes it look even more dark, as there is no shiny, waxy finish which shines in the light and makes it seem lighter than it actually is (which happens with most graphite pencils).

One interesting item is this list is the Musgrave 600 News pencil, which doesn’t carry any grade rating. It’s a specialized pencil that was designed for writing on newspaper and for musical notation, where a super smooth, super soft graphite core is the goal, and it succeeds wonderfully at this. It’s a special pencil with a specialized goal, and it’s a fun purchase if you use a pencil in your hobbies.

Other pencil companies, like Aspara, make drawing pencils that get quite dark, but in our testing they aren’t quite as dark as the ones listed above. Also, many of these pencils have gotten to be hard to find so were didn’t include them on this list some of the excellent, and very dark, but also very rare pencils include:

If you want the darkest pencil then you want a Mitsubishi Hi-Uni 10B. It’s very dark, it’s super smooth, it’s easy to find online (and perhaps locally if you have a nearby art store), and it costs about $3 per pencil.

If you want the blackest pencil, which means very dark but the color shifts more toward pure black (making it less pencil-like) you’ll want to get either a charcoal pencil from General’s or you can get the Faber-Castell Pitt 12B, which has more of a traditional pencil feel, but has the near-black tone you’d get from charcoal.