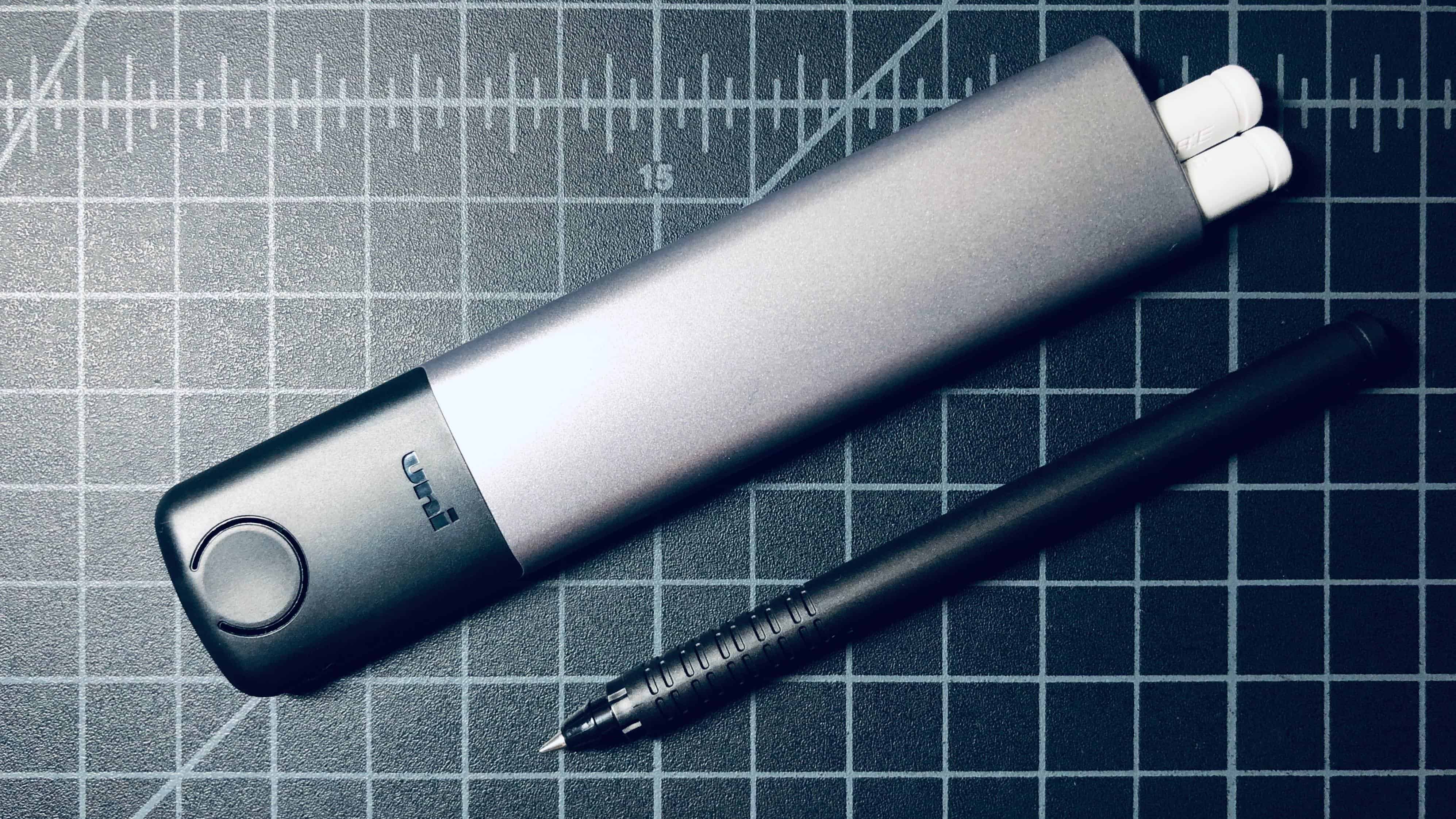 The Uni R:E+ (known as the “R E Plus”) isn’t one pen, it’s actually three pens and a holder. It’s a cool concept that is fitting for Uniball’s highly designed RE family of erasable pens. The set of pens was first released in June 2019.

The pen set comes with a plastic case and has one black erasable pen (the color is closer to grey), one red erasable pen (closer to light red), and one black Jetstream pen that is not erasable. The R:E+ case includes a metal click with an adhesive backing.

Note: This pen is only currently available outside of Japan by buying through Amazon Japan.

Despite their size and small size, the pens are actually refillable with normal Uni SXR refills. The erasable refills use thermo-sensitive ink that can be erased simply with friction from the back of the pen, which is not actually an eraser but rather just plastic.

The R:E+ case is a lightweight plastic shell with no features aside from a button on it. When this button is pressed the payload of three pens pops out of the case. They only extend about an inch, at which point they are still firm in the case but can be pulled out with a slight tug. This mechanism works quite well as it prevents the pens from being accidentally released from the case if they happen to be in a bag or clipped to a binder, notebook, etc. Uni’s R:E pen series is one of the more interesting family of pens sold today. In addition to being notable for being erasable, the series is sort of experimentation ground for the company where interesting designs are tried out. This means some success as well as some failures. The R:E+ is a definite win: it looks cool, it’s affordable, and the case is fun to use. The entire pen system isn’t super functional and the pens are a bit small, but they are large enough to be useable and they use standard refills, which is a great feature.

On the downside, the Uni erasable ink is simply not as good as Pilot’s Frixion ink so writing with the R:E pens is not as good as it could be. The greyish colors of the R:E series is a constant disappointment, especially when compared to the included Jetstream pen that makes up one-third of the pens in this set. The R:E+ is a Japanese pens so the instructions that come with the pen are undeniably cool. On the downside, it’s are to fully parse the information on the card without a working understanding of Japanese.