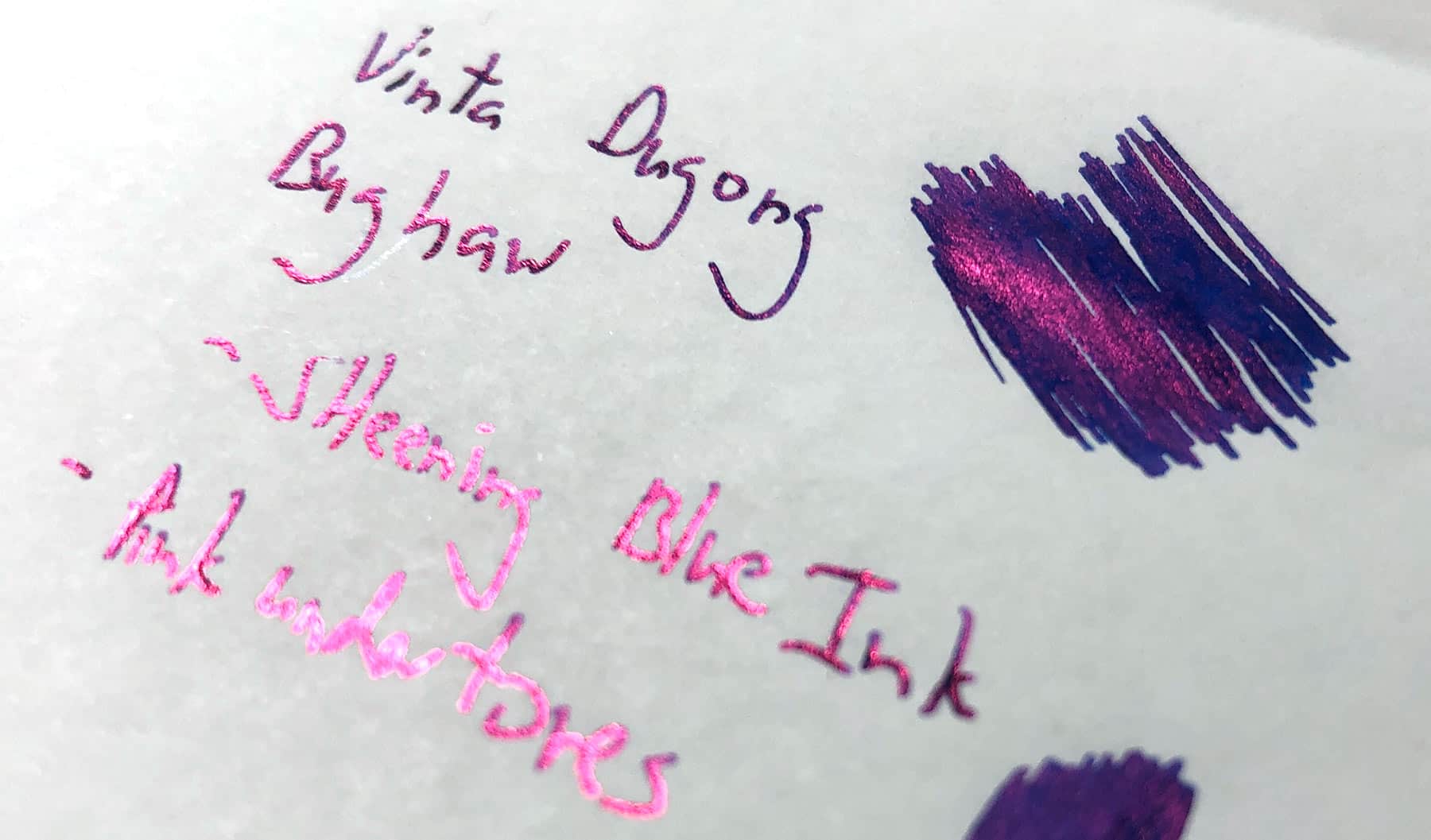 When discussing fountain pen ink people will often talk about “sheen” and how desirable it is. But what is sheen? What causes it? Which inks have the best sheen?

Read on to find out.

Sheen is one of the main qualitative descriptors of fountain pen ink. Like “bleed through” and “feathering” it is a fundamentally important quality to most fountain pen ink fans.

Sheen is, by definition, when a fountain pen ink dries and appears to be shiny, to the extent of being a different color, when looked at from an angle. A blue ink might dry to look slightly pink. A green ink might have a hint of red. A black ink might look a little purple in the right light or if you tilt your head just a bit.

Sheen can be subtle or right in your face. It is a metallic or oil slick appearance that happens when you look at a dried ink in a certain light.

If you have a pure black ink, it might still have sheen, but it will simple appear to be metallic or shiny when viewed at an angle.

The Best Inks for Sheen

Many fountain pen inks have sheen, so this list is by no means exhaustive, but there are some real standouts if you want great sheen in a reliable ink. These are the best inks with sheen, not inks with the most sheen!

These inks include (in no particular order):

These are, to be completely accurate, some of our and our friends’ favorite inks for sheen, all of which have good performance, reasonable prices, and good clean-ability. These are the best inks with sheen, not inks with the most sheen!

How Do You Promote Sheen?

If you want sheen you can do two things to maximize it… assuming you have an ink with sheen. The first is a pen with a nib that puts down a lot of ink. The more ink, the more sheen. An ink with a lot of sheen might not show the sheen with an extra fine or fine nib, but anything medium or larger will work.

The second thing you need to promote sheen is to have a paper that resistants ink. Fountain pen paper, like Tomoe River, is resistant to ink, which means slow dry times and a lack of absorption or spreading. Slow dry times is critical to sheen because it means pooling and collecting of ink which means more ink saturation and more sheen.

Do Only Special Inks Sheen?

Absolutely not. All sorts of inks have some sheen, including great everyday ink, like Lamy’s standard Blue fountain pen ink sold in massive quantities in the company’s T10 cartridges and 50 ml bottles.

Without getting out of our depth on the chemistry or physics of sheen, it is caused by the collection of particles of the ink’s dye after the water in the ink dries. As the ink particles dry and collect they form a kind of iridescence on the paper. More dye (of the right kind) can lead to more shimmer, but without knowing the particulars of the dyes used by each manufacturer (not something typical made public) it’s hard to say exactly why sheen happens.

Is Sheen the Same as Shimmer?

No! Shimmer means an ink has something put in it, like little pieces of glitter, that causes sparkling in it. Some really nice shimmer inks are J. Herbin Emerald of Chivor and J. Herbin Bleu Ocean. The inks have particulate in them that cause the shimmer, but it might also clog your fountain pen or at least make cleaning it a challenge.

It’s particularly important to note that shimmer will happen on any paper where shade is very dependent the paper to happen.

It’s also worth nothing that some inks can both shimmer and sheen with Emerald of Chivor being a good example of this.

Is Sheen the Same as Shading?

Once again, no. Shading is when an ink looks different depending on how saturated that particular spot of paper is with the ink. An ink might go from a light yellow at one end of a pen stroke to a deep gold at the other, thanks to an ink that has great shading abilities. Shading is like sheen in that it’s a quality of a fountain pen ink that people might or might not want, but they two are different.